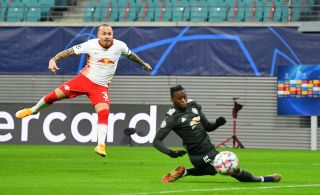 Aaron Wan-Bissaka didn’t have one of his better games against RB Leipzig last night. It’s fair to say anyone watching the game with red tinted specs were left unimpressed by the full-back who is usually brilliant defensively.

First it’s important to note that Manchester United didn’t lose last night or crash out of the Champions League because of Wan-Bissaka. That would be witch-hunt territory and he has done nothing to warrant that.

Eventually, conceding goals early in games was going to come back and haunt us. We can’t keep getting away with comebacks and that’s a risky game to play anyway. I’ve thought about this and have wondered whether Ole Gunnar Solskjaer should start games by telling his players they’re a goal behind once the ball is first kicked.

Wan-Bissaka’s positional sense cost us at the beginning. He was guilty of tucking in way too deep, which defeated the purpose of starting with a back five when we’ve got possession of the ball.

•1st goal- too narrow due to tracking Forsberg who was already marked by Lindelof, so Angeliño too much space to shoot
•2nd goal- again too narrow allowing Angeliño to assist

I suspect he will bounce back from this with the rest of the lads. This weekend would be a good time in the Manchester derby.

United fans were left unimpressed with Wan-Bissaka and took to Twitter to vent:

Wan-Bissaka with the worst half I’ve seen by a united player this season. Absolute disgrace. Not good enough to play for United. Plain and simple. Genuinely would prefer Ashley Young#mufc #RBLMUN

Not even joking, I'm bringing Fosu-Mensah on at HT. Wan-Bissaka has been horrendous tonight, including tackling himself. Not there, mentally or physically.#RBLMUN #UCL

Wan-Bissaka has been failing to cover his outside for a year and a half now and the fact that it hasn’t been identified and dealt with already tells you everything you need to know about how abysmal at coaching Ole and his staff are. #MUFC

Wan-Bissaka looks like he has never played RWB in his life.
This is a mess.
There is hope, we beat this side 5-0 a few weeks ago, but something had to change very quickly…#MUFC

Wan-Bissaka is really struggling tonight! What a horror show. Unbelievable.