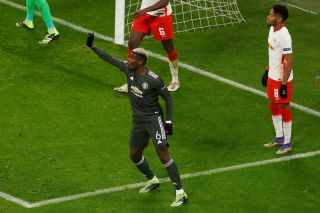 Paul Pogba looks set to leave Old Trafford after his agent, Mino Raiola, revealed he is unhappy at Manchester United.

Juventus director Fabio Paratici weighed in on the Paul Pogba transfer saga, admitting “we love him very much” following Raiola’s bombshell claims on Monday — the eve of United’s crucial Champions League meeting against RB Leipzig, which they lost 3-2 only to crash out of the competition.

Raiola said, as per Tuttosport/Fabrizio Romano: “It’s over for Paul Pogba at Manchester United.”

The player is not innocent in all of this.

Pogba knows when his agent plans to publicly address the media and we know he has spoken about his dream to play for Real Madrid.

It remains to be seen whether the La Liga giants will still be interested in signing Pogba, but Raiola will likely try to get the player back to Turin.

The French midfielder previously played for Juventus from 2012-16.

Following Raiola’s outburst this week, Paratici admitted that the club still has admiration for its former player, but he wasn’t ready to commit to any pursuit just yet, as per Fabrizio Romano citing director’s response to Mediaset.

Juventus sport director Fabio Paratici to Mediaset: “Pogba back to Juve? We love Paul, he’s an amazing player but he’s playing for Manchester United now. He’ll not be a free agent, you’ve to pay if you want to sign Pogba…”. 🇫🇷 #Juve #MUFC

Juventus are welcome to having Pogba back. I wouldn’t stop a move and I don’t think Solskjaer will be against one either.

Read more: Man United player ratings vs RBL: Too little too late as Reds go out with a whimper