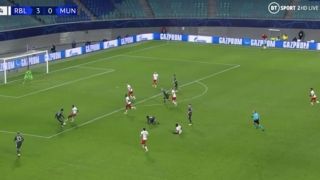 It wasn’t Manchester United’s night on Tuesday after they went crashing out of the Champions League at the hands of a 3-2 defeat to RB Leipzig.

However, despite what was a hugely disappointing night for United fans around the world, teenager Mason Greenwood continues to provide hope for the future.

The United youngster had a decent game on Tuesday evening and although the 19-year-old failed to get on the scoresheet, he did come close after showcasing some superb skill inside the box.

Read more: Man United player ratings vs RBL: Too little too late as Reds go out with a whimper