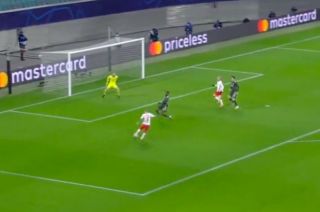 Manchester United have made the worst possible start to their decisive Champions League game away to RB Leipzig.

Ole Gunnar Solskjaer’s Reds qualify for the European knockout stages if they avoid defeat in Germany.

But they have fallen behind in the opening two minutes through Manchester City loanee Angelino’s early strike.

United’s five-man defence completely switched off and Aaron Wan-Bissaka has to take responsibility from not picking up his man at the back post.

The Reds will take comfort in their superb away record but have given themselves it all to do on a defining night at the Red Bull Arena.

READ MORE: Solskjaer stresses decision to drop Pogba was tactical, not in response to Raiola’s comments