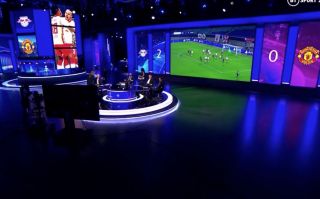 There’s not a lot of positives to take from that first half.

This is not something we see every week, but it looks like BT Sport’s match coverage cut to the studio prior to half-time while the pundits were being spruced up.

Manchester United are currently two goals behind in Germany and risk crashing out of the Champions League, depending on what happens in Paris between PSG and Istanbul Basaksehir.

At this point nobody really knows what’s happened in the game — I’ve been watching United (!) — but it was interrupted due to racism claims against one of the match officials.

The game has been suspended for now, so we await news on the outcome of that one…

Anyway, we’re not sure what happened in the BT Sport studio either. Someone must have accidentally pressed a button behind the scenes!

It happened during a United free-kick so it’s not as if anyone missed it!