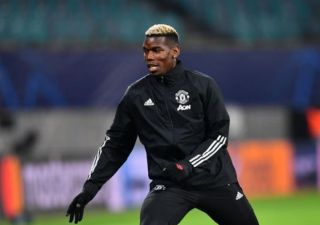 The Reds take on the Bundesliga outfit tonight in a winner-takes-all. United share 9 points with Leipzig and Paris Saint-Germain, who face Istanbul Basaksehir at 8pm tonight.

“We made a team decision way before the game.”

Pogba travelled with the squad to Germany yesterday when an interview with his agent dropped on the internet. It sparked uproar throughout the football community, with both Gary Neville and Gary Lineker weighing in on the discussion.

The timing was awful but it was done purposely by Raiola. Pogba has yet to address the comments which suggest he is looking for an escape route out of Old Trafford.

On the eve of such an important game, it’s only right to be disgusted by Pogba but he could still have a big say in the outcome tonight.

The Frenchman is on the bench and could feature at some point of the match.

United don’t want to be playing Europa League after Christmas. Tonight is a big one!