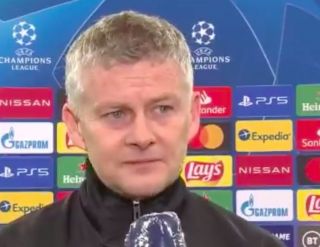 Ole Gunnar Solskjaer stressed Paul Pogba ‘just needs to focus on his own performances’ after Manchester United crashed out of the Champions League against RB Leipzig.

United were defeated 3-2 on a dramatic evening at the Red Bull Arena but much of the build-up was dominated by Pogba’s agent Mino Raiola who insisted on Monday that the Frenchman’s time was up at the club.

Pogba started on the bench against Leipzig and almost helped spark a dramatic late comeback as he scored United’s second eight minutes from time.

But the Reds ultimately fell short and drop down to the Europa League.

The circus surrounding Pogba’s future won’t top the list of Solskjaer’s concerns on what felt like a defining night for the Norwegian.

But he was inevitably asked about the midfielder at full-time and refused to be drawn into where his future lies.

Solskjaer said Pogba must focus on his own performances and only he can be asked whether he is content at the club.

Listen to Solskjaer post-match below, via BT Sport:

"You've got to ask Paul if he's happy or unhappy."

"He's focused on doing his best for the team when he's here."

READ MORE: Solskjaer gets it wrong as Man United crash out of Champions League against RB Leipzig