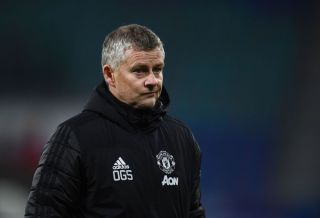 Manchester United are back playing on Thursday nights and have themselves to blame.

This time Ole Gunnar Solskjaer wasn’t to be saved by individual brilliance on a defining evening in Leipzig.

Solskjaer repressed his army of cynics 41 days ago when he got it right against Julian Nagelsmann’s dishevelled side in Manchester.

But United’s propensity to start slow has cost them when it matters most against their more intense, well-drilled opposition in Europe.

When Bruno Fernandes slotted a penalty and centrepiece villain Paul Pogba rose highest ten minutes from time, supporters could have been forgiven for pondering the inevitably around an equaliser that would have completed yet another timeless comeback.

But, in truth, United’s group stage campaign was derailed long before Nordi Mukiele kicked the ball against his own goalkeeper’s legs in the final seconds.

An apathetic night in Istanbul and bewildering managerial naivety against Paris Saint-Germain lead to a showdown against a side driven by revenge.

And, ultimately, Solskjaer got it wrong again with a system that fell into the hands of one of the competitions most dynamic teams.

The five-at-the-back system set up to neutralise the Leipzig’s threat had backfired inside 15 minutes, with an immobile midfield of Nemanja Matic and Scott McTominay deluged by the rampant home side.

It’s reprehensible to field five defenders and two protective midfielders and still look so vulnerable and exposed from the start.

Passive United had no answer for the overload in the middle and by the time the formation changed and Donny van de Beek was introduced at half-time, it was all too late.

It begs the question, why change from the winning diamond formula that earned such praise for outwitting Nagelsmann in October?

Errors from players and at management level over three games have caused the club to plunge back into the competition they thought they had seen the back of.

READ MORE: Man United player ratings vs RBL: Too little too late as Reds go out with a whimper