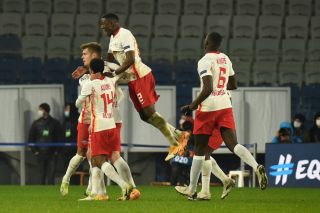 Manchester United will be looking to book their place in the last 16 of the UEFA Champions League knockout stages when they face RB Leipzig at the Red Bull Arena on Tuesday night.

The Reds only need a point to book a place in the last 16 however a win in Germany would ensure Solskjaer’s men progress to the next round as group winners.

David de Gea is widely expected to return in between the sticks for United having missed the clubs 3-1 victory over West Ham at the weekend whilst Paul Pogba is also expected to keep his place in the starting eleven after impressing against the Hammers last time out.

United shouldn’t really be finding themselves in this position going into the final game of the group. A shock 2-1 away defeat in Istanbul and defeat at home to Paris Saint-Germain has left United needing to gain at least a point to qualify to the last 16 and travelling to Germany in need of a result is a situation which Solskjaer and United could have avoided.

Currently sitting third in the Bundesliga only two points off the top the German side have enjoyed a fantastic start to the season under Julian Nagelsmann and, although United may have won comfortably against the Leipzig last time round, they are a different animal at home and United will have to be at their very best should they wish to leave Germany with a result.

Inconsistency has remained United biggest flaw so far this season and it’s that inconsistency which makes it almost impossible to guess which Manchester United side will turn up. If the reds turn up and play like we did in Paris earlier in the season then United will be on their way to the last 16 but if the United side that lost in Istanbul turns up then we could be in trouble.

It’s a game which in many ways could shape Manchester United’s season. Progressing to the last 16 would lift moral at the club a give everybody a boost going into the second half of the season whereas defeat would dampen the mood and leave United facing Europa League football something of which has become an all to familiar scene at Old Trafford in recent years.

Despite the reds inconsistency and Leipzig’s impressive form at home I still expect United to leave Germany with a result. It wont be an easy game nor do I expect United to win as convincingly as they did against Leipzig earlier in the campaign but I still expect us to qualify albeit it may be closer than we would have liked to be.