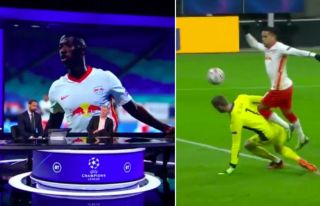 Paul Scholes has slammed David de Gea for his ‘criminal’ goalkeeping in the build-up to RB Leipzig’s third goal as Manchester United crashed out of the Champions League.

United were defeated 3-2 by Julian Nagelsmann’s men at the Red Bull Arena and De Gea was at fault for the third goal that ultimately cost them a place in the European knockout stages.

The Reds almost completed an incredible comeback after pulling two goals back late on, but the decisive misunderstanding between Harry Maguire and De Gea proved costly midway through the second-half.

The duo failed to deal with a fairly innocuous cross from the left-hand side and Justin Kluivert pounced to compound United’s embarrassment.

United legend Scholes believes De Gea turned away from the ball because he was ‘scared’ about getting hurt.

“David de Gea here, he bottles it, basically he’s scared of getting himself hurt,” he told BT Sport.

“It should never go across the box like that, Harry Maguire looks wooden, he’s very stiff.”

“And De Gea, as a goalkeeper, he comes out, make yourself as big as you can – you might get smashed in the face, you might get injured, but he turned his back away.

“He actually makes himself smaller which is criminal for such an experienced goalkeeper, its criminal.”

Listen to Scholes on De Gea in full below, via BT Sport:

"He bottled it. He was scared of getting himself hurt."

"He makes himself smaller, it's criminal."