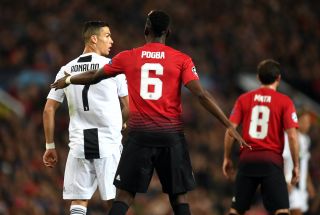 Paul Merson believes Paul Pogba knew about Mino Raiola’s statement about his happiness at Manchester United, and has encouraged the midfielder to “go and play snooker” if he wants the game to be all about him.

Ole Gunnar Solskjaer’s side play their biggest game of the season yet tonight against RB Leipzig, and the night before that game Raiola decides to announce that it would be best for Pogba to leave Old Trafford.

The problem is not Raiola admitting what many already knew. The problem is the timing and aggressive tone in continuing to speak down about the manager.

“Raiola says the style of football doesn’t suit him,” Merson told Sky Sports. “He’s playing in a football team. He’s not a snooker player. He plays with 10 other players. You join a team.

“It’s not like Man Utd are the most defensive team you’ve ever seen. Look at Tottenham! I don’t hear Harry Kane and Son moaning. Go and play snooker if you want it to be all about you.

“He knew the statement was going out. It’s his agent. He might play dumb, he might turn around say he didn’t know, but of course he knows. He’ll also know there’s a club interested in him. Raiola would have spoken to a club that is interested in Paul Pogba.

“They’re not going to mug themselves off by saying: ‘Paul wants to leave’ and then nobody comes in for him. Everything is already sorted on Pogba’s side of it!

“An agent doesn’t come out and say a player wants to leave without interest there. Pogba knows full well what his agent is doing: Raiola has a club for him. You keep on hearing about Ronaldo coming back to Man Utd — that could be a shout — Pogba for Ronaldo?”

That’s a call and a half… even at 35, Ronaldo’s shadow would contribute more than Pogba.

The Portuguese star could be looking for a new club next year and I’d imagine United will want to get rid of Pogba.

Merson continued: “It just hasn’t really worked for him. The lad can play, I’ve watched him at Juventus and with France, you don’t win a World Cup if you can’t play.

“When he’s played for Juventus, they dominated every football match they played in. They had 70 per cent of the ball, and you’re going to touch it 40, 50 times more than you do at Man Utd, so you’re going to do three or four more good things in a game.

“It’s confidence. We can all say: ‘Is Paul Pogba that good?’ It’s all confidence. The lad can play, but we never talk about his confidence.

“Is Bruno Fernandes a better player than Paul Pogba? Technically no. But at the moment he looks it. He’s playing with absolute freedom, all the confidence in the world.

“Some places just don’t work for people. There’s always a ‘fit’ for a player, where you enjoy your football, but with Pogba, from day one it just doesn’t look right.”

Jamie Carragher labelled Pogba and Raiola a “disgrace” and urged United to move the Frenchman on.

This has backfired on Pogba and I don’t think he has any other choice but to respond to the comments publicly. The fans deserve that.