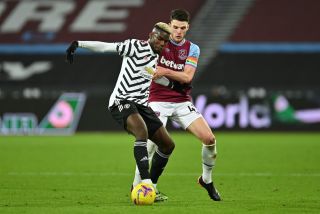 Manchester United are preparing to take on RB Leipzig in the UEFA Champions League tonight.

The Reds know a win will see them top Group H but a draw would also see them qualify for the knockout stages of the competition.

Paris Saint-Germain have a straight-forward clash at home to Istanbul Basaksehir, and you would have to fancy their chances of winning tonight.

RB Leipzig are the third club in Group H that shares 9 points, so one of these clubs will be playing Europa League football after Christmas.

#MUFC final training sessions ahead of #RBLMUN were without Paul Pogba in line-up doing shape work. Not expected to be in starting XI barring late change

This comes in light of news that came directly from Pogba’s agent Mino Raiola that the midfielder is looking to leave Old Trafford. Pogba has yet to address the comments and it sounds like Solskjaer has made the right move to leave him out of tonight’s team.

To make such comments the night before a crucial European match reeks of unprofessionalism. It undermines Pogba’s manager and team-mates, who have a lot more important things on their plate right now.

Hopefully Bruno Fernandes shows everyone why he’s a million times the player Pogba is tonight. We need it.

Read more: Paul Merson reckons Pogba should turn to snooker + Ronaldo swap deal could be on for United