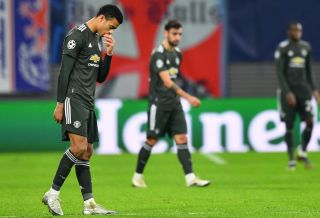 Manchester United travelled to Germany this evening to face-off against a hugely in-form RB Leipzig side in a match that was effectively a Champions League group stage shootout.

United needed to avoid defeat in order to progress into the illustrious competition’s knockout rounds, however, it wasn’t to be as Julian Nagelsmann’s side came out on top after a 3-2 win.

In light of tonight’s hugely disappointing result, we have rated every United who featured.

Failed to keep out RB Leipzig’s third – Looked susceptible to a clanger all evening.

Worst performance I have ever seen from the usually reliable full-back. A dreadful first-half followed by an in effective second.

Failed to block a crucial cross which lead to RB Leipzig’s third.

Not the spider’s night, at all.

Subbed off with just over 10-minutes to go for Timothy Fosu-Mensah.

Dire first-half but looked slightly more assured during the second-half.

United’s number-2 was regularly caught out of position and looked to lack a decent reading of tonight’s game, which is worrying ahead of the notoriously hectic festive period.

Dire performance from United’s captain. Pulled all over the place. Commanded nothing.

In line with the rest of the team, Maguire did improve during the second-half, but will still be kicking himself not to have gone on the end of a great chance.

Tough game for Shaw to come back into after a long injury lay-off, but still wasn’t good enough.

Taken off for Brandon Williams just after the hour-mark.

The Brazilian has not had a good game since his arrival and tonight was arguably his worst of the lot.

Subbed off at half-time for Donny van de Beek.

Offered nothing during the first-half. Constantly out of position and failed to recover time and time again.

Subbed off for Paul Pogba after 61-minutes.

Poor first 45-minutes but grew into the game much better as it went on.

Much improved second-half after the Scotsman finally got up to speed with the pace of the game.

Best of a bad bunch during the first-half. The Portuguese midfielder posed the Reds’ biggest threat.

Hit the bar from a free-kick during the second-half but ultimately couldn’t do a thing to slow his side’s downfall despite scoring a late penalty.

Had one chance during the first-half and fluffed his lines. Poor overall.

Had United’s best chance and scuffed it. Should have scored.

United’s youngster looked lively throughout but similarly to Fernandes, couldn’t help keep his side in Europe despite winning his side a late penalty-kick.

Subbed on for Alex Telles at half-time.

United’s Dutchman appeared to have changed the game after coming on but despite his efforts, the 23-year-old struggled to unlock RB Leipzig’s rigid defence.

Came on in place of Nemanja Matic during the 61st-minute.

Sprayed a few decent passes from deep and got on the end of a floated cross to make it 3-2, shame it wasn’t enough.

Like-for-like switch in place of Luke Shaw during the 61st-minute.

Looked lively and energetic when he came on, provided a lot more in attack than Shaw and Telles combined.

Subbed on for Victor Lindelof with just over 10-minutes to go.

Came on in place of Wan-Bissaka and had a little over 10-minutes worth of action.