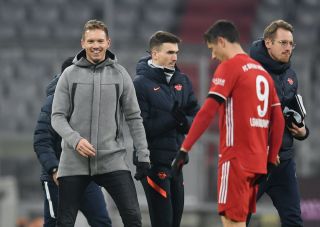 It’s a winner-takes-all tie between Manchester United and RB Leipzig on Tuesday night.

And, although we don’t want the lads going into the game with this mindset, a draw would also see the Red Devils progress in the UEFA Champions League.

In the lead up to the game, German coach Julian Nagelsmann has warned United that Leipzig’s defeat in the reverse fixture will not affect them ahead of the crucial decider tonight.

The Reds won 5-0 on the night at Old Trafford but Nagelsmann is convinced that won’t be on their minds ahead of this game.

“We have tried to learn our lessons from the 5-0 defeat in Manchester. The final scoreline was a bit high, we didn’t play that bad,” he told a press-match press conference, as per Manchester Evening News.

“Overall, we had too few chancers in their box and weren’t aggressive enough in the final third. We were almost too scared to attack. We need to play differently on Tuesday night — we have to find more ways of attacking and try to get behind their defence.

“We are prepared for Manchester United stepping up a gear. They’ve shown on a number of occasions so far this season that they can come from behind. They are dangerous right up until the final whistle. The game is only over when the referee blows for full time.

“We won’t look back on the past meeting. The group is complicated for both teams. We need to win to get through. The heavy defeat in Manchester hasn’t made it any easier for us.

“They have been top of the table throughout the group, but their defeat to PSG has changed things for them. We want to win at all costs and reach the knockouts!”

Manchester United, Leipzig and Paris Saint-Germain all go into the final match day of the group stages level on nine points, however, Ole Gunnar Solskjaer’s side hold a narrow advantage due to their goal difference.

Edinson Cavani and Anthony Martial are both ruled out for the match but David de Gea and Luke Shaw are back in contention to feature after traveling with the squad to Germany.