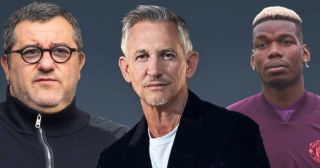 Gary Lineker has reminded Mino Raiola and Paul Pogba that the Frenchman is still contracted to Manchester United.

It’s worth remembering with the player under contract at Old Trafford. Whether or not Raiola and Pogba decide to respect that is another story, and I think it’s very clear that they don’t…

The World Cup-winner shouldn’t need reminding, ahead of a huge game, who he plays for but Lineker rightly felt the need to make that clear via Twitter on Monday night.

Raiola officially confirmed Pogba wants out at Old Trafford on the eve of the team’s crucial Champions League decider against RB Leipzig.

The agent told Tuttosport: “I can say that it’s over for Paul Pogba at Manchester United.”

Lineker hit back to remind the duo that Pogba is still contracted to United until he officially pens a contract with another club.

“Not quite over,” tweeted Lineker. “There’s a pretty big game to play tomorrow for starters. You’d think he might bear that in mind.”

Not quite over. There’s a pretty big game to play tomorrow for starters. You’d think he might bear that in mind. https://t.co/YlOte5PYuX

Raiola confirmed Pogba is looking to leave the Red Devils in January but failed to mention any clubs he may be interested in joining.

Pogba has made 13 appearances in all competitions for United this term, and he is in contention to play against Leipzig on Tuesday night.

Former United captain Gary Neville has called on Pogba to react to Raiola’s comments. Deciding not to respond to these recent comments, in my opinion, should see the club act quickly to get rid of the former Juventus midfielder.