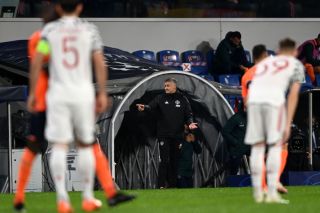 Ole Gunnar Solskjaer’s line-up to face RB Leipzig in the UEFA Champions League has been announced by the official Manchester United Twitter account.

We’ve got nerves in our belly tonight as the final matchday of Group H in the Champions League could see any of three teams qualify for the knockout stages.

A win would see Manchester United top the group, however, they share nine points each with RB Leipzig and Ligue 1 champions Paris Saint-Germain.

PSG play host to Istanbul Basaksehir which should be a walk in the park for the Parisians, who are boosted by last week’s 3-1 win over United at Old Trafford.

United are away tonight in frosty Germany with a place in the Champions League knockouts hanging in the balance. They will need to be at their best to get a result against Julian Nagelsmann’s side.

The team news is in…

There is no Paul Pogba in the starting line-up, as reported first by Jonathan Shrager via Twitter, and it comes as no surprise after recent comments from the player’s agent about him wanting to find a new club.

The Frenchman was named on the bench.

That looks like a back three with two wing backs, and a front two of Mason Greenwood and Marcus Rashford.