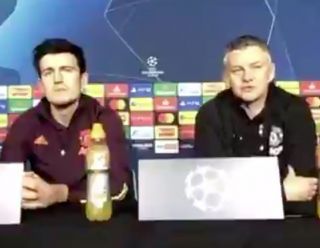 The Reds thrashed their Bundesliga opponents 5-0 in the reverse fixture, but that will mean little tomorrow evening against the side with a formidable home record.

Leipzig need victory to qualify and will be eager to gain revenge on United. Julian Nagelsmann’s men will also be high in confidence after a dramatic 3-3 draw to Bayern Munich on Saturday.

United captain Maguire has said pre-match that he joined the club to play in the biggest games possible, and tomorrow’s fixture is undoubtedly the biggest game of the season so far.

Maguire compared the game to the Premier League final day away to Leicester in July where United won 2-0 when needing a result to secure their Champions League place.

Solskjaer, meanwhile, also emphasised the importance of the fixture and is confident his players can deliver the decisive result.

Listen to Solskjaer and Maguire preview the game against RB Leipzig below. Footage courtesy of UEFA:

OGS and Maguire give their own perspectives on tomorrow night's #UCL game against RB Leipzig. 🗣#MUFC pic.twitter.com/kTBkOVjtad