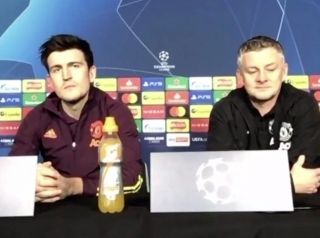 Harry Maguire believes Manchester United will have a great chance of qualifying for the Champions League group stages if they can replicate the character shown away from home in the Premier League.

The Reds travel to RB Leipzig knowing they can secure their places in the European knockout rounds if they avoid defeat.

Group H has been blown wide open after last weekend’s defeat to Paris Saint-Germain at Old Trafford but United’s task is simple against the Bundesliga side who will be desperate for revenge.

Leipzig were disheveled in their 5-0 defeat in Manchester but have formidable home form and can qualify with victory at the Red Bull Arena.

United, however, have won all five away Premier League games this season after going behind, testament to the belief and never-say-die attitude Ole Gunnar Solskjaer has instilled in his players.

Maguire says United will need the character, spirit and confidence they have shown already in this campaign to secure a decisive result.

Listen to Maguire previewing the RB Leipzig fixture below. Footage courtesy of UEFA: