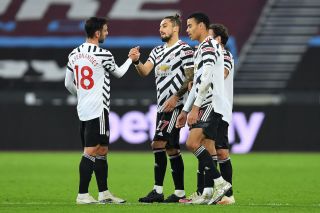 Bruno Fernandes is the one who makes things tick for Manchester United. He is also a leader on and off the pitch.

The Portuguese star’s first year anniversary at Old Trafford is only around the corner, but the impact he has had on Ole Gunnar Solskjaer’s side in just a short period of time is remarkable.

There is a captain in Bruno Fernandes and it could be seen at the weekend against West Ham.

Solskjaer decided before the match that it was time to give not only Fernandes a rest but Marcus Rashford too. At half-time he scrapped those plans and brought the attacking duo on before they completely turned the game on its head.

As soon as Fernandes and Rashford came on you could feel something different. They make things happen on the pitch and without Fernandes we looked utterly lost out there.

It was 1-0 at half-time when the duo was introduced. At full-time it was 3-1 in United’s favour, with two of the those three goals scored by Fernandes and Rashford. Solskjaer’s final substitute Juan Mata recorded an assist.

Fernandes reacted to the game on Twitter with an important message for the fans.

Forgive me for thinking that’s the ultimate plea to fans to get behind each player and the manager.

A proper message from a proper player.