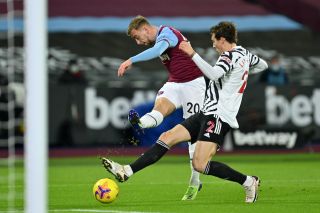 Manchester United moved into fourth place in the Premier League after a second half salvo that saw Ole Gunnar Solskjaer’s Reds overturn an interval deficit over David Moyes in-form Hammers.

As fans returned to Premier League grounds – with 2,000 inside the London Stadium – United improbably closed to within two points of the summit with a ninth consecutive away victory.

You’d have got long odds on a 3-1 victory as a torrid Reds side toiled for the best part of an hour but, by hook or by crook, the Reds prevailed. Here are three things we learned from the London Stadium.

Eyebrows were raised when Solskjaer’s team sheet filtered through an hour before kick off. The United boss clearly had one eye on Tuesday’s make or break Champions League tie in Leipzig when he selected his side, with top scorer Marcus Rashford and talismanic figurehead Bruno Fernandes left out.

The pair were carrying injuries with Rashford nursing a shoulder knock and Fernandes struggling with an ankle problem. It was a decision that initially backfired with the pair forced to watch the first half horror show from the bench as United toiled without any semblance of cohesion, energy and creativity. Solskjaer will not have wanted to use his big hitting match winners so early, but – just as against Southampton – circumstances left him with little alternative and the manager made a double change at half-time with Donny van de Beek and Edinson Cavani hooked. Fernandes teed up Paul Pogba for the equaliser, and Rashford was involved in Mason Greenwood’s goal before he lobbed in the third himself on the counter.

If nothing else, this match told us just how crucial these two are to Solskjaer’s United. Even the mere presence of the metronomic Portuguese changes the entire dynamic of this side.

For the first time in 272 days, fans were present at a Manchester United game. There may have only been 2,000 present in a ground with the capacity for 60,000 but it’s a start. With London placed in Tier 2 after the lifting of England’s second national lockdown, the Hammers became the first club to welcome back fans in the Premier League after a nine-month absence.

The capital clubs, Liverpool, Everton, Southampton can welcome up to 2,000 fans under new Government guidance for a tentative re-opening of professional sport. Old Trafford will continue to keep its gates locked for at least another two weeks, with Trafford, Salford and Greater Manchester placed in Tier 3, the highest level of Covid restrictions, areas in which games still need to be played behind closed doors.

Not since the 2-0 win over Manchester City back in March had supporters watched the Reds in action and, although there is still a long way to go before stadiums reach that level of fever pitch, it begins the gradual drip-feeding of getting supporters back into grounds. With the promise of a vaccine on the horizon, there’s light at the end of this very long tunnel. The mere sight of fans – albeit mask-wearing, socially distanced ones, marked the first tentative step on the way to something resembling normality.

Jekyll and Hyde United’s only consistency is their inconsistency

This was Manchester United’s baffling season in microcosm. For an hour we bewildered, yet for an half an hour we dazzled. Inept and off the pace for an hour, the Reds could count themselves fortunate to only be 1-0 down at the interval after another set-piece concession. Yet, somehow, United spluttered into life and turned on the style in the closing stages, with three-goals in 13 second half minute turning the tide. This side take the very definition of inconsistent to new levels, not only from week to week or game by game but from minute to minute. The stats make for impressive reading – nine away wins on the bounce, into the top four and only two points off the top with a game in hand. Yet the nature of the performances don’t back up the numbers – despite winning all five on the road in the league, the Reds have started poorly in each of those, going behind every time and only truly coming to the party when up against it and with backs firmly in a corner.

They have often flattered to deceive and at times have been carried to victory by individual brilliance and sheer willpower. It is becoming impossible to predict exactly what we’re going to get, and – whilst this United side are anything but dull – these erratic showings cannot continue ahead of a crucial week with Leipzig and City on the horizon. Brilliantly bonkers it may be, but a raison d’etre for a successful side? Anything but.