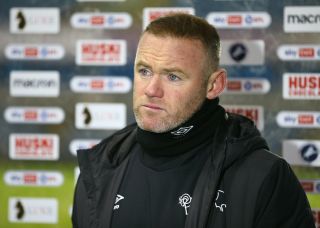 Manchester United legend Wayne Rooney was left appalled at what transpired before his Derby County side took on Millwall in a Championship clash on Saturday.

Rooney got his first win in interim charge of Derby as they saw off Millwall to move off the bottom of the Championship. Jason Knight scored the winner in the 69th minute to end the Rams’ 11-match winless streak.

The former United striker will set himself an objective to take Derby out of the drop zone and as things stand they are within two points of safety after yesterday’s win.

It is the first weekend that supporters are allowed back into stadiums in England, and Millwall fans unsurprisingly took it upon themselves to boo both sets of players when they knelt in support of the Black Lives Matter movement.

You won’t be surprised to hear that West Ham fans did the same before Ole Gunnar Solskjaer’s men came from behind to win 3-1 at the London Stadium, as per The Athletic.

This did not please Rooney.

“I was very surprised if I’m being honest,” he told talkSPORT.

“Everyone at Derby County has been in full support of taking the knee, so it was quite surprising and I’m sure for our players it could have been difficult to hear that.

“But they reacted well, they put it to the back of their minds and they got on with the game, so credit to them for that. But I don’t think that is condoned in football.”