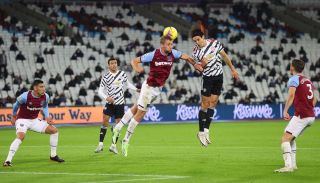 Ole Gunnar Solskjaer has confirmed both Anthony Martial and Edinson Cavani were substituted with injuries during Saturday’s win against West Ham.

Martial started on the left of a front three with Cavani operating as the central figure joined by Mason Greenwood on the right.

Although Manchester United went on to win the game 3-1 they fell behind at half-time following Tomas Soucek’s opener.

Unlike in the midweek defeat against PSG, Solskjaer made changes at the break with Bruno Fernandes and Marcus Rashford replacing Cavani and Donny van de Beek. It wasn’t long before Martial picked up a knock and had to be replaced by Juan Mata.

The good news for Solskjaer is all three of his substitutes made a second half goal contribution.

He confirmed that both injuries will be assessed ahead of Tuesday’s trip to RB Leipzig in the UEFA Champions League.

“We lost Anthony and Edinson,” Solskjaer told MUTV, as per Manchester Evening News. “Hopefully they aren’t too bad but they couldn’t carry on today. There’s a game coming up on Tuesday but that’s probably going to be the season this year.

“There’s going to be some games that we have to do without players and I’m glad we’ve got the subs that we have. They’re not bad ones (injuries) hopefully. We’ll do scans and hopefully they’ll be available soon.”

A point would do United against Leipzig but they will probably need a win to top Group H.

PSG are going to destroy Istanbul Basaksehir on the night to guarantee their place in the knockout stages which is something we would have achieved if we didn’t fail to beat the Turkish champions on their own turf.