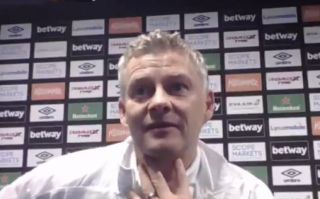 There were calls for Manchester United’s equaliser against West Ham to be overruled on Saturday.

The reason being how the ball appeared to go out of play before Paul Pogba smashed home a long-range effort.

West Ham boss David Moyes was furious at the time — and the Reds went on to make matters worse for the Hammers just three minutes later as Mason Greenwood scored his 20th goal for the club to become the youngest United player to achieve that feat since Norman Whiteside.

Solskjaer on whether the ball went out of play leading up to Pogba’s equaliser against West Ham: “The ball went over my head…” 😂😂 #WHUMUN pic.twitter.com/E4QsD2ueao

“The ball went over my head,” Solskjaer said after the match, and you don’t need telling that the boss wasn’t on the pitch at the time.

A journalist points out that VAR can’t investigate incidents on the touchline, and bravely asks Solskjaer if he thinks changes should be made to give video technology even more power over the game.

This is likely to cause uproar on social media, especially among West Ham fans, but it’s best to laugh it off. They’re a pretty irrelevant bunch anyway.

West Ham must be suffering from nosebleeds after being so far up the table.