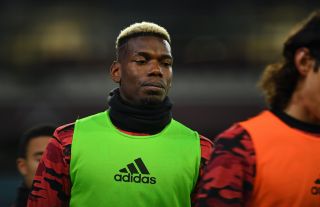 Paul Pogba has revealed the effects that COVID-19 had on his fitness.

It might go some way to explain his below average form at the beginning of the season, but it will take a lot more than a stunning finish against West Ham to convince me he should be a regular starter for Manchester United.

The Frenchman tested positive for coronavirus in August. It forced him out of the France squad and into quarantine.

A low point for Pogba this season came in United’s dismal 6-1 home defeat against Tottenham in which he conceded a penalty. He’s made few starts in the Premier League since then, but made the line-up on Saturday as Ole Gunnar Solskjaer’s men travelled to London to take on West Ham.

Pogba scored a stunning goal to equalise but his all-round display was questionable to say the least.

When asked how COVID-19 had affected him, Pogba told MUTV: “It’s strange, it’s hard to explain because you wouldn’t understand.

“Even in training, I would say to the fitness coach that I feel strange. It’s not me. I get tired very fast and I’m out of breath really fast.

“The first game of the season, I couldn’t run. I was trying. I spoke with the manager. ‘I will start the game and let’s see’, but I was very out of breath and it took me a long time to get back to my fitness and to get back physically good.

“It’s such a difference. I’m finding my rhythm as well. I feel so much better, I felt I could go again, control the game, getting the ball. That’s what I like, myself.

“That’s what I think is good for the team. I’m a team player. As long as the team wins, that’s the most important, you know? That’s why I came here and that’s why I want to be successful.”

Pogba’s goal from 25-yards lifted United and we went on to win the game 3-1, despite being a goal behind at half-time.

“I hit one in the first half, it didn’t go well, but the second time it went in and I’m really happy with this.”

The question is should Pogba start for United against RB Leipzig in Fred’s absence? It’s going to a huge night for the team.