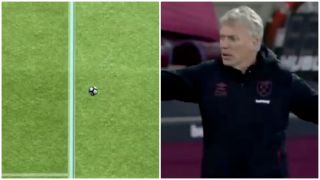 ICYMI: Match of the Day footage was able to prove that the ball did in fact go out of play leading up to Paul Pogba’s equalising goal against West Ham on Saturday.

It takes nothing away from Paul Pogba’s tremendous strike which put United in a position to come back from behind and win the game 3-1.

David Moyes was visibly upset on the touchline and we can see why, so it’s a good thing we won by a two-goal margin… otherwise I can only imagine what bile he would’ve spouted after the match.

The days he spoke about aspiring to be as good as Man City whilst in charge of United has stained my view of Moyesy (via Sky Sports), not to mention the dire football we were subject to under his management.

Ole Gunnar Solskjaer, however, inadvertently admitted the ball went out of play in his post-match press conference.

Solskjaer on whether the ball went out of play leading up to Pogba’s equaliser against West Ham: “The ball went over my head…” 😂😂 #WHUMUN pic.twitter.com/E4QsD2ueao

But BBC’s Match of the Day took some delight in proving Moyes right on Saturday night.

Still, I don’t think it will make Moyes feel any better about yesterday’s game.

I think I’m enjoying the fact this happened to a team managed by Moyes way too much! 👀😂

3 responses to “Video: Match of the Day prove ball went out of play prior to Pogba’s equaliser v West Ham”