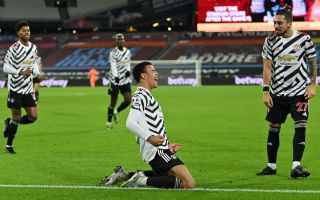 That’s what Manchester United as far as the Premier League is concerned.

The Reds came from 1-0 down to win 3-1 against West Ham on Saturday, winning their second consecutive league match after coming from behind (3-2 vs Southampton). This proves there is belief in the team and the players are clearly behind the manager.

United’s win over the Hammers means they’ve overtaken Tottenham as the team with most points from losing positions in Premier League history. A record we are proud to have even if Marcus Rashford doesn’t want to keep relying on comebacks…

This could become a game of cat and mouse, however, as Tottenham plan to beat rivals Arsenal in the eagerly anticipated North London Derby later today.

385 – Following their win at West Ham, @ManUtd have won more points from losing positions than any other side in Premier League history. Dogged. #WHUMUN pic.twitter.com/YUtFXvYE5n

Man Utd have now won 385 points from losing positions – more than any other side in #PL history#WHUMUN pic.twitter.com/2ZZxNuVh6z

However, the table which matters most sees Manchester United fourth in the Premier League.

We know there’s plenty of room for improvement, but Solskjaer deserves a chance to build this squad and the progress isn’t hard to see so long as you avoid knee-jerk reactions on social media every time the Reds play.