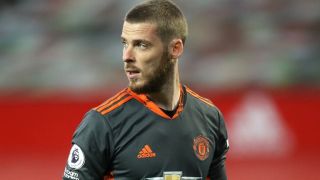 David de Gea was an absentee for Manchester United in their 3-1 win over West Ham on Saturday but he was keen to voice his delight on Twitter.

There is always a buzz when your side comes from behind and we’ve done that in our last two Premier League games. It bodes well for the future that this side is not willing to be pushed aside, and would rather fight until time runs out.

Ole Gunnar Solskjaer’s side were dreadful in the first half against the Hammers, finding themselves 1-0 down and lucky not be further behind. Dean Henderson stood in to replace De Gea but he could do nothing to deny West Ham’s opening goal.

United’s second choice goalkeeper went on to play a huge role in setting up the equaliser for Paul Pogba, even if his pass to Bruno Fernandes went out of play, with Solskjaer inadvertently admitting the ball went over his head on the touchline.

David Moyes’ side couldn’t deal with us from this point and eventually threw away a third goal as Marcus Rashford sealed the win,

David de Gea, watching from home, showed his delight with a tweet as seen below:

It remains to be seen whether De Gea will be fit to face RB Leipzig on Tuesday night in a crucial UEFA Champions League encounter.