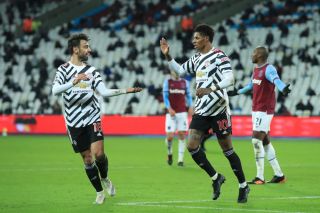 Manchester United signed Bruno Fernandes less than a year ago and the Portugal star has proven a big hit ever since his move from Sporting Lisbon.

That’s why it doesn’t surprise us that there is early talk about Fernandes getting a new deal at the club.

According to the Daily Mirror, Fernandes could now earn a bumper new contract that would double his wages to around £200,000-per-week.

The report suggests that United are making a move amid interest from Real Madrid and Barcelona after seeing the 26-year-old midfielder score 22 goals and register 14 assists in just 37 games.

Fernandes is one of the best midfielders in the world right now so it doesn’t surprise us that he’d attract interest from Spain’s biggest clubs.

Paul Pogba has been linked with a move to Madrid in the past, as per AS, although they are probably looking at Fernandes as the player they want most when they look at the players currently at Old Trafford.

I would be a big statement if United can secure Fernandes on a new long-term contract. Not only is he our best player, we haven’t got anyone that leads the team in quite the same way as the Portuguese star.

Fernandes is a winner and we want to see him win trophies at United.