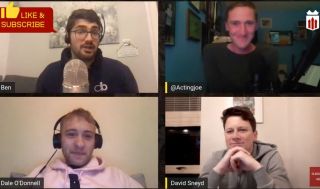 This week I was delighted to feature on All for United as a guest with respected Irish football journalist David Sneyd.

Ben and Joe hosted the show on Friday night prior to Manchester United’s 3-1 win over West Ham.

The show itself isn’t match specific but we chat about a number of things such as our first United game, anecdotes with Cristiano Ronaldo and Darren Gibson, as well as a fun fan quiz with an Irish theme.

The main topic of the night was Ed Woodward’s recent comments from a Fans’ Forum. The executive vice-chairman makes it very clear that the club backs Ole Gunnar Solskjaer, so he will be delighted with another comeback win this weekend.

Check out All for United’s videos for more MUFC-related content.

They’re doing a lot of good work over there when it comes to match preview and match review shows.