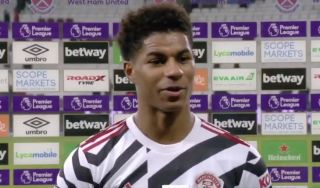 All laughs and giggles at full-time.

Marcus Rashford says half-time gave Manchester United a chance to regroup after failing to get in behind West Ham in the first-half.

But the comeback kings did what they did against Southampton by coming from behind to take all three points to move up the Premier League table.

The Manchester United forward was happy to see fans — albeit West Ham — back at games, so hopefully it won’t be long before we can all return to Old Trafford to cheer on the lads.

“We need to stop doing that,” Rashford said when asked about United’s comeback against the Hammers.

Marcus Rashford on Manchester United going a goal down and coming back stronger against West Ham @MarcusRashford pic.twitter.com/YrOgyAKf2E

Rashford came off the bench to score one of United’s three second half goals which turned the game on its head.

Read more: Man United player ratings vs West Ham: Fernandes and Rashford to the rescue as Greenwood shines through the middle