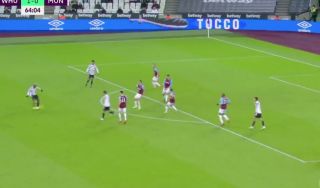 Best moment of the match for Manchester United and it came from Paul Pogba.

The Frenchman scored an absolute screamer to equalise against West Ham at the London Stadium.

Pogba had not performed well against West Ham, but his goal gives United a chance to get back into the game and take three points from another away fixture.

The goal went to VAR over doubts the ball went out of play, though it stands so we can celebrate from the comfort of our homes.

David Moyes was furious on the sidelines after the goal went in.

It’s all up for grabs now. Come on, United!

Update: Mason Greenwood has just made it 2-1!!