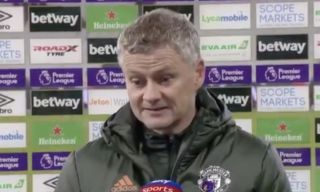 Manchester United manager Ole Gunnar Solskjaer has given an honest assessment of his side’s up and down performance against West Ham after seeing his side complete a 1-3 comeback.

Solskjaer travelled with his Red Devils to the country’s capital as they faced-off against an in-form Hammers side.

An early shock Jarrod Bowen opener put United on the back foot and for nearly an hour, Solskjaer’s men were second best.

Goals from Paul Pogba, Rashford and lastly Mason Greenwood capped off another away win as the Reds now move up to fourth in the Premier League table.

Speaking after the game, Solskjaer admitted today’s opponents are a very decent side but couldn’t hide his smile when weighing-in on his team’s late showing.

🗣”Last week we were 2-0 down against Southampton, this was a step forward only 1-0 down” 🤣

Read more: Man United player ratings vs West Ham: Fernandes and Rashford to the rescue as Greenwood shines through the middle