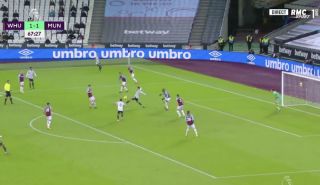 After an absolutely dire 60-minutes against West Ham, the Reds have finally come to life.

Ole Gunnar Solskjaer was forced to watch his side trail after a Jarod Bowen early opener fired the Hammers into a shock lead.

However, after an inspired Paul Pogba finish dragged United level, teenage sensation Mason Greenwood has fired the Devils into a crucial 2-1 lead.

Greenwood popped up after some classy link-up play between Bruno Fernandes and Alex Telles and clinically controlled an inch-perfect ball whipped in and finish it off on the turn.

They’re never out of it.