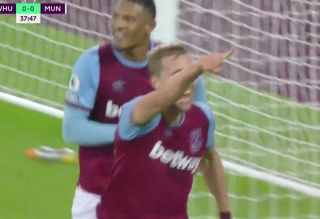 Manchester United are all over the place.

Tomas Soucek opened the scoring for the Hammers after some shocking defending from the Red Devils.

They trail by a goal and I find myself watching the first goal wondering what on earth Alex Telles is doing?

Soucek makes the run as West Ham take the corner and Telles allow him run to the back post before getting a touch on the ball.

Watch the goal below courtesy of RMC Sport:

Dean Henderson will be gutted not to keep a clean sheet, but he can’t be at fault for Telles not picking up his man on a corner.

Read more: Why Bruno Fernandes is not starting for Manchester United against West Ham