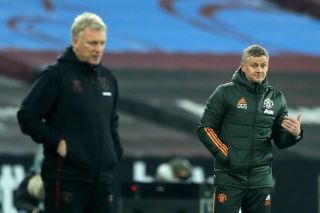 Manchester United made it nine Premier League away wins in a row at West Ham — and it took a comeback which emerged from one of their worst defensive displays in modern memory.

Without giving the manager’s decision any thought, angry tweets emerged on social media from people who are likely to claim the Norwegian knows nothing about managing this side, but I’m sure most of those tweets have been removed.

It didn’t come across anyone’s mind that Cavani could have picked up a knock, as Solskjaer confirmed after the match. He explained why the Uruguayan made way at the break, saying (via Metro): ‘It’s unfortunate that you get muscle injuries and Edi had to come off with an injury. Hopefully it’s not too bad.’

Solskjaer was reluctant to make changes at half-time against PSG and received justified criticism as a result. However, if you’re going to dish it out, surely it’s only fair to give him credit when it’s deserved?

The fact of the matter is, United got it wrong before they got it right against West Ham.

David Moyes’ West Ham had the ball in the net through Bowen in the 8th minute but it was overruled for offside.

For a chunk of the first-half West Ham were invited to attack the away side — and whenever we got the ball we’d lose it again in quick succession.

I fret whenever I see us concede corners, and I wish for throw-ins when we win corners. It shouldn’t be difficult to see why as for West Ham’s opener Declan Rice was unmarked on the near post for the flick on and Tomas Soucek was also unmarked on the far post to nudge the ball in.

West Ham pushed for another goal prior to the half-time whistle. Bowen was clear on goal before an excellent fast-tracking tackle by Aaron Wan-Bissaka took him out and the ball cleanly.

The decision to keep Pogba on the pitch after half-time was always going to raise eyebrows but, unlike Fred midweek against PSG, it went in Solskjaer’s favour as he scored the all-important equaliser out of the blue.

Player Ratings: Bruno Fernandes and Marcus Rashford to the rescue as Greenwood shines through the middle

Pogba struck an excellent curling effort from the edge of the box after Dean Henderson found Bruno Fernandes down the line.

United quickly pushed on and scored a second to take the lead. This time Telles’ cross was met in the box by Mason Greenwood who didn’t take his time to put the ball in the back of the net.

With under 15 minutes to go, Juan Mata (another influential substitute) played an exceptional first time pass to Marcus Rashford, who sealed the result.

It is no surprise that Solskjaer had to call on Fernandes and Rashford to save the day, but his decision to bring on Mata led to another goalscoring contribution.

Mistakes are inevitable in this job and, hopefully, this is a sign he is learning. The table is looking much better too — with United in fourth place and just three points off the top with a game in hand on Chelsea.

Enjoy the rest of your weekend, Reds. I’m signing off on this note.