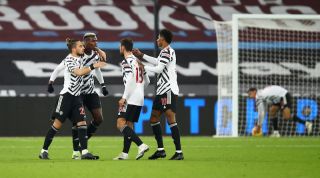 Manchester United are making a habit of this.

The Reds have moved into the top four – two points from the Premier League summit – with an unlikely comeback victory against West Ham at the London Stadium.

Ole Gunnar Solskjaer’s side were well below-par for an hour in front of 2,000 West Ham supporters, but turned the game around in stunning style with three superb goals.

Solskjaer hoped the decisive duo wouldn’t be required with one eye on Tuesday’s game against RB Leipzig in the Champions League, but their impact was colossal.

Paul Pogba curled in a stunning long-range equaliser on the hour-mark and United were finally sparked into life.

Mason Greenwood then produced a moment of sheer brilliance to turn and find the bottom corner to put the Reds ahead.

Rashford, arguably man-of-the-match for his influence after the break, chipped in to seal United’s fifth away victory this season – in all of which they have been behind in.

Questions will remain over United’s over reliance on Rashford and Fernandes, but three points is all that will concern Solskjaer.

United are a true enigma right now but are within touching distance of the top of the league and credit must be reserved for the spirit and fight of Solskjaer’s players.

See reactions from delighted and relieved Reds on social media below:

MUFC have score three times in four away league games this season and four in the other. Record ninth straight away league win, yet went behind again and so bad until equaliser. Up to 4th and two points off top of league. Ratings to follow.

Been impressed with how Marcus doesn’t let his head drop after missing a chance. He keeps going, did it PSG away, did it at Newcastle and again today. He’s on course for his best goal scoring season ever and there’s levels still to come! JM

United have picked up more points than any team in the league since signing this guy 310 days ago. pic.twitter.com/ViHXwHSAE3

I simply do not understand Manchester United at all.

Like me, most of the people I speak with during and after a game can’t work #MUFC out!

We've got to be able to perform without Bruno. AWB tackle first half crucial. Henderson putting subtle pressure now on DDG, performing well. Half the team like different players in each 45. Whatever was said at ht, worked. But we've got to stop going behind… Anyway, relax!

What a weird game!!! Moments changed the games as well as individuals. Brilliant comeback but similar themes that I don't thin we can keep getting away with. Bruno, Rashford and Mata we're quality tho!