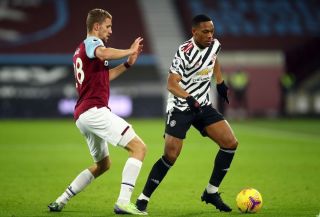 Anthony Martial has dealt Manchester United a huge injury blow as he was forced off in the second-half of the Premier League clash against West Ham at the London Stadium.

Martial was quiet in a shambolic first-half performance from Ole Gunnar Solskjaer’s side and limped off on the hour mark.

The French forward, who missed last weekend’s dramatic comeback victory against Southampton, appeared to be feeling his groin in pain and was replaced by Juan Mata.

Martial’s injury is a key concern for Solskjaer with the Reds preparing for a decisive Champions League fixture against RB Leipzig in midweek.

Meanwhile, United have again completed an improbable turnaround and lead 2-1 against David Moyes’ side.

The Reds have been flat for large periods but the half-time substitutions of Bruno Fernandes and Marcus Rashford have changed the game.

Paul Pogba, who has been poor throughout, brought United level with a stunning curled effort.

The goal went under VAR review as Dean Henderson’s pass was checked, but there was no way of confirming the ball went out of play.

Just minutes later, Mason Greenwood turned and finished superbly to give the Reds an unlikely lead.

We will keep you updated on the extent of Martial’s injury on Stretty News.