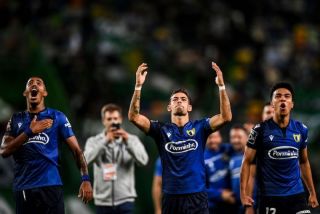 Manchester United are reportedly interested in defensive midfielder Gustavo Assunção, who is valued at £22.55m, but the Reds are set to face competition from a host of top European clubs.

Assunção, 20, who was part of Atletico Madrid’s youth academy from 2017 to 2019 currently plies his trade with Portuguese side Famalicao.

The talented South American who primarily operates as a defensive midfielder but can also fill in, in a more central role is emerging as one of Europe’s brightest breakthrough talents.

Having already featured in 46 matches in all competitions for his current side, the exciting Brazilian has began to turn the heads of some of football’s biggest clubs.

According to a recent report from AS (via Sports Witness), the 20-year-old has emerged as a potential target for the likes of Wolves, Everton, Sevilla, Nice and Ole Gunnar Solskjaer’s United.

AS’ report claims that despite United’s interest in the holding midfielder, La Liga side Sevilla could very well be the favourites to land the 20-year-old after their sporting director, Monchi, is a strong admirer.

It has been reported that should a club wish to secure the services of Famalicao’s talented midfielder, they’ll need to cough up over £22m in order to be successful.