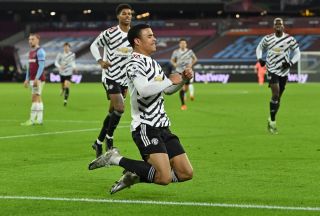 Mason Greenwood played a key role in Manchester United’s win at West Ham and he reached a remarkable goalscoring milestone in the process.

On top of that, Gary Neville heaped praise on the young forward while analysing the game for Sky Sports.

Neville called Greenwood the best finisher at Manchester United after his superb strike against West Ham.

The Red Devils were one goal behind at half-time following Tomas Soucek’s strike, however, three goals after break saw Ole Gunnar Solskjaer’s side turn a second game on its head in under a week.

“The individuals like Pogba and Greenwood – they’ve got star quality. Good from Fernandes, then Telles plays it in. He’s the best finisher in the club, Mason Greenwood. That is class. The first touch, I always say every time I watch him I feel it’s Robin van Persie. The power on the strike is what beats the goalkeeper.

“You could argue that Mata, Greenwood, Martial and Rashford, they all want to play centrally and certainly Greenwood does. I think he’s the best footballer out of all of them. He’s young, he has so much potential, it’s unture.”

The Van Persie comparisons are not new – but it says a lot that they are consistent. Greenwood has been brilliant for United, a real pleasure. Who knows how good he can become because he’s so lethal in and around the box with both feet.

To draw comparisons to another United legend, Greenwood has scored 20 goals for United since breaking into the first team — and has become the youngest player to reach that landmark for the club since Norman Whiteside, as per Sky Sports Statto.

This was his 1st @premierleague goal since July 22 – also against West Ham pic.twitter.com/MYEeXi38Ht

Greenwood’s goal against West Ham was his first in the Premier League since July 22.

It’s great to see him back in the team!