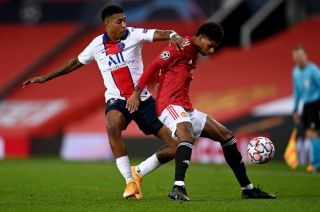 Marcus Rashford was substituted with a shoulder injury on Wednesday night against Paris Saint-Germain after signalling to the bench that he needed to come off.

The forward missed the November international break over problems with the same shoulder, so we’re all hoping to see him back in action soon and fully recovered.

Ole Gunnar Solskjaer provided an update on Rashford at a press conference this morning.

“Marcus has been training this morning, not fully but he joined in with the group,” the boss said, as per Manchester Evening News. “His shoulder stopped him finishing the game so he’s been getting treatment and hopefully he’ll be part of the squad that travels, we’ll see after training.”

We can only hope Rashford is available — whether it’s on the bench or starting the game — because losing him is a huge blow.

The coaching staff will be mindful of the fact we lost Rashford to a long-term injury last season, and one that could have ruled him out for last season’s Premier League conclusion but thankfully it didn’t.

A win is needed on Saturday and having Rashford in the line-up will give United more firepower going forward.

The only other injury update Solskjaer gave at his press conference was in relation to Luke Shaw, who has been out for almost a month with a hamstring injury.

Solskjaer added: “Luke’s not ready yet, apart from that we have a big squad again.”