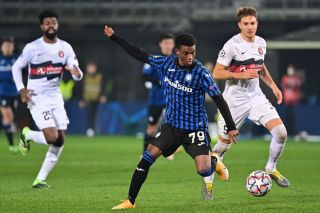 Amad Diallo could make his first start for Atalanta at the weekend.

According to Calcio Atalanta, the Manchester United bound winger is being considered as a starter for this weekend’s fixture away to Udinese, on Sunday.

Diallo has had some minutes on the pitch lately despite not featuring all season. He came off the bench in his side’s last two matches, including a run out in Champions League which will do his experience the world of good.

It would be nice to see Diallo start some games to really get a feel for what he can offer on the football pitch. He will arrive at Old Trafford as a young exciting prospect and Ole Gunnar Solskjaer has given plenty of young players chances in the first team since becoming manager.

I believe that is part of the big appeal for young players to join United these days. As well as the prospect of playing with talents like Marcus Rashford, Mason Greenwood and Bruno Fernandes.

Atalanta have six games to play over the next 17 days and Diallo is likely to have more involvement than he had at the beginning of the campaign.

Diallo is due to fly to Manchester in January when he will link up with his new team-mates for the remainder of the 2020-21 campaign.

The Reds need to get his work permit approved, but it’s expected to be a formality without any surprises.