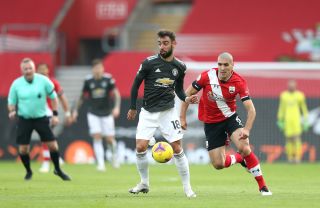 Manchester United midfielder Bruno Fernandes is one of seven nominees for the Premier League’s Player of the Month award for November.

The Portugal international has been included in the reckoning after another stellar month, during which he lead United through a much better period after a slippery start to the season.

On top of that, Ole Gunnar Solskjaer is among the nominees for the Premier League’s Manager of the Month award.

The Norwegian has had a lot of negative stuff written about him in recent months but it is nice to see the Mauricio Pochettino reports fade away again.

I, for one, am desperate for Solskjaer to succeed.

Manchester United announced on Twitter (@ManUtd) that both Fernandes and Solskjaer were up for awards.

November started with a disappointing home defeat against Arsenal and three days later we lost 2-1 away to Istanbul Basaksehir in the UEFA Champions League. The reason Solskjaer is in the running for this month’s award, however, is down to United’s strong response.

United won their games against Everton, West Brom, Istanbul Basaksehir, and Southampton — and we’re on a quest back up the Premier League table.

It’s great to see Solskjaer nominated for the manager’s award when just one month ago some people were suggesting he should be sacked.