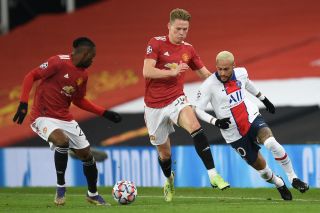 Manchester United midfielder Scott McTominay was far from happy about how Paris-Saint Germain’s players conducted themselves during Wednesday’s crushing 3-1 defeat.

United’s Champions League campaign now hangs precariously in the balance as Wednesday’s devastating loss now means United must get at least a draw against RB Leipzig next Tuesday in order to reach the knockout stage.

Midfielder McToninay was named in Ole Gunnar Solskjaer’s starting line-up for Wednesday’s match at Old Trafford and if being tasked with keeping the likes of Neymar Jnr quiet isn’t enough, McTominay’s partner Fred put instant pressure on the pair after picking up an early yellow card.

The young Scotsman was seen battling it out with Neymar Jnr all evening with the Brazilian attacker seemingly getting the best of the exciting duel after bagging a brace.

However, despite Neymar Jnr’s very decent performance overall, the world-class attacker was spotted on more than one occasion making the most of every challenge put in on him.

There was incident during the first-half which saw McTominay back away from a downed Neymar Jnr and accidentally stand on his ankle.

Speaking after the match, McTominay was quick to make it clear how disappointed he was in some of Paris-Saint Germain’s players unsportsmanlike conduct.

“The reaction of their players is [shakes head]…” McTominay said afterwards, as quoted by the Metro.

“I’ve got nothing to say about that, you get in trouble if you start speaking about that and the referee.”

Although never naming names, I think it’s safe to assume the United midfielder is hinting at Neymar Jnr.