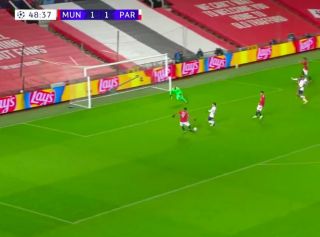 Anthony Martial should have put Manchester United in front against Paris Saint-Germain.

The French forward, operating on the left-flank after returning from illness, has blazed over with the goal at his mercy at Old Trafford.

Martial’s golden opportunity came shortly after the break with the two teams tied at 1-1.

But Martial couldn’t keep his composure to give the Reds a crucial lead.