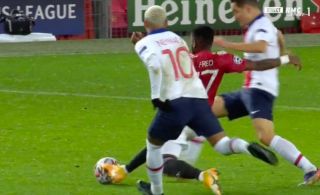 PSG took the lead midway through the second-half through Marquinhos after David de Gea’s superb save forced a corner.

Anthony Martial and Edinson Cavani had squandered glorious chances to give United the lead earlier in the second-period.

And just moments after Thomas Tuchel’s side took a crucial lead, Fred was dismissed for a challenge on Ander Herrera.

Fred was extremely fortunate to receive a straight red card for a headbutt on Leandro Paredes in the first-half.

But remarkably, he was actually unlucky to be given a second yellow after he won the ball going to ground against the former United midfielder.

Ole Gunnar Solskjaer will now rue not making what would have been a prudent decision to remove Fred from the firing line at half-time.

Fred looked so hard for that red card and he finally got it 🔴🎥pic.twitter.com/g0TYeukE1s