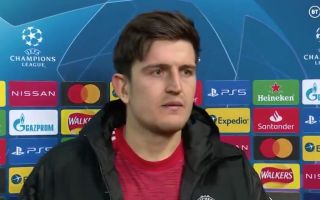 Football is a game of fine margins.

Harry Maguire claims two of PSG’s three goals were scrappy and he believes Manchester United deserved something from the game.

The United skipper did not sound happy in his post-match interview with BT Sport, but conceding scrappy goals is nothing new for this side. It is a problem that needs addressing.

Maguire accepts that it would have been a different story had Anthony Martial and Edinson Cavani converted their efforts in front of goal.

Looking on to RB Leipzig in the final game of the group, Maguire accepts they are a “good team” but he will take some positives from tonight’s game to move forward.

He wasn’t happy with Fred’s sending off either, saying: “The second one isn’t a yellow card.”

"Strange how he gave a yellow card, it's either nothing or it's red."

"The second one isn't a yellow card."

Harry Maguire was frustrated by Fred's sending off but accepted that Man Utd came up short at home to PSG.