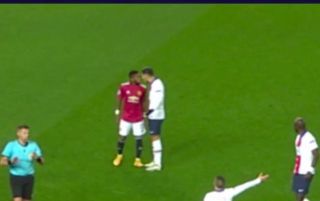 Manchester United are 1-0 down in their key Champions League fixture against Paris Saint-Germain at Old Trafford – but things could have been so much worse.

Fred is extremely unfortunate to escape a straight red card for a petulant headbutt on opposite man Leandro Paredes.

The Brazilian moved his head into Paredes and a dismissal seemed inevitable after referee Daniele Orsato was advised to check the incident on the pitch side monitor.

But incredibly, Orsato branded Fred a yellow card in a huge reprieve for the midfielder who could have cost his side.

We can only assume the referee saw no aggressive intent, but Fred’s actions mirror what Nicolas Pepe got sent off for against Leeds last week.

United have got away with one there.

EDIT: The Reds are now level against the run of play after an own goal from Danilo.

See the decision below, footage courtesy of BT Sport: