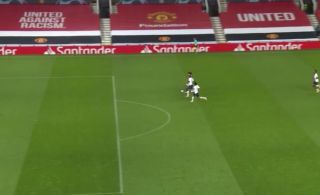 It was one that would have dominated the headlines.

Edinson Cavani was played in on goal and cheekily chipped former team-mate Keylor Navas in an attempt to give Manchester United the lead over Paris Saint-Germain.

Unfortunately, it was denied by the woodwork but it would’ve been a stunning goal.

A draw would be enough to see United reach the knockouts but PSG could do with a win to keep their hopes alive.

After the ball bounced off the crossbar it fell to Bruno Fernandes who squared the ball to Anthony Martial only for the Frenchman to be closed down by PSG’s defenders.

Pictures below courtesy of BT Sport: