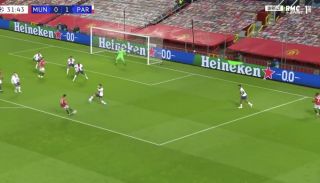 Manchester United are riding their luck in tonight’s match against PSG.

Having found themselves one nill down after Neymar Jnr popped up with an early opener, United have been desperately trying to find their feet since.

Midfielder Fred can consider himself a very lucky man after a head-butt on counterpart Leandro Paredes resulted in just a yellow, surprisingly.

However, the goalscoring heroics have once again come from attacker Marcus Rashford.

United’s number-10 unleashed a shot which rebounded off the PSG back-line and nestled into the back of Keylor Navas’ net.

Undoubtedly though, the Reds will have to come after half-time and put in a better showing during the second 45-minutes.