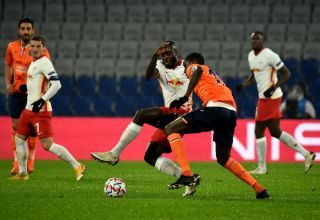 RB Leipzig will be missing key defender Dayot Upamecano for their final game in Group H in the Champions League against Manchester United next week.

Upamecano, 22, has been a figurehead in Julian Nagelsmann’s side since his arrival back in 2017 and having helped guide the Bundesliga outfit to a place in last season’s semi-finals, the Frenchman has emerged as one of Europe’s brightest talents.

However, as Group H hangs tensely in the balance, RB Leipzig will need to find a way to manage Upamecano’s absence when the German side face United next Tuesday.

RB Leipzig’s commanding centre-back picked up a third yellow card of his European campaign earlier tonight whilst in action against Istanbul.

Upamecano suspended for Leipzig’s game against United next week. #mufc

Should the Reds beat Thomas Tuchel’s men for a third time in as many seasons, alongside Solskjaer’s team, RB Leipzig will also be firm favourites to reach the knockout stage.

However, should United draw or lose to their Ligue 1 counterparts this evening, next week’s final match day will prove decisive, with everything still to play for.